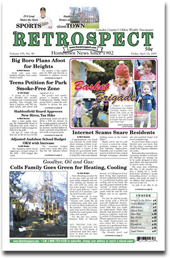 How liberating would it be to one day wake up and call your utility company and say, "I'm putting my furnace on the curb with my rusty old hot water heater. Cancel my oil [or gas] delivery. I don't need any of it anymore. I get my heat from the Earth."

The second call, to your neighbors and friends, "Anyone who wants the air conditioning units that used to cool our three bedrooms in the summer - they are on the park strip next to the furnace and the hot water heater. First come, first served."

For the last two weeks, Kennon Dick of Harvard Avenue in Collingswood has been living that experience. He just completed installation of a geothermal heating and cooling unit in his home. He says the project started as the "moons" of home mechanical systems which aligned to create what he and his wife Maura saw as an opportunity.

For one, he and his family were living with a 25-to-30 year-old inefficient furnace. Second, a fifteen year-old hot water tank that was ready for replacement. Third, they already had ductwork in the house, no radiators. And lastly, on Feb. 13, President Barack Obama signed into law a new tax credit. Homeowners can now collect 30% of their expenses on a geothermal heating installation, instead of the former cap of $2,000.

Dick says "there are a lot of little incentives like that," that include rebates from geothermal unit manufacturers. His geothermal heating and cooling unit is from Carrier and was installed by Foley Mechanical Heating and Air, based in Medford.

It's not just about tax breaks, though. Installation of a geothermal system is expensive. Dick says his installation has cost him $25,000, for which he has taken a home equity loan. About $8,000 of that expense will come back to him, via the new geothermal 30% credit, within the year - as an actual credit, not as a deduction. He also automatically saves $2,000 a year or more on heating oil costs.

The way geothermal works in the Dick household is through a vertical well installed in the backyard through to the basement. A well-drilling unit came to the house and drilled two holes, each only six inches wide, 275 feet deep into the earth. A line is run through theses wells and to the house in a 'closed loop.' The line carries a coolant that brings warmth from the home in summer months for 'holding' underground until it is needed in winter. Excess heat is used to run the hot water heater in the home.

The premise is simple. During the winter, the ground water is warmer than the ambient air temperature, representing a heat difference that can be pumped through the coolant loop. In the summer months, the ground water table is much cooler, allowing the process to work in reverse, essentially putting a house's heat into the ground.

Dick explains that for nine months out of the year, the system maintains a temperate climate very simply: air in, air out. For months when there is not excess heat (like the dead of winter), his hot water heater will have to work on its own, using electricity.

Since the system runs on an electrical pump that sends either heat out and cool in or cool out and heat in, Dick anticipates about a $60 jump in his electrical costs, still lower than the $100 a month he used to pay to run air conditioning units throughout his house in the summer months. Dick jokes, "I'm part Scotch - so saving money has always been an interest of mine." But he emphasizes more seriously that "with the election of Obama" and the incentive of "our family doing our part for a greener planet" it was the right time to make the change.

He adds, "Our thought process was that with the fluctuation in oil and gas prices and three kids to send to college, oil and gas in the $3 per gallon range kills our budget." This way, costs are more consistent for the Dicks, over the whole year. He keeps his thermostat a consistent 68 degrees all winter and 75 degrees all summer. It's no longer necessary to turn the settings up and down to save energy during the day - it's more efficient not to do that.

In looking ahead, Dick says that going solar would make the system complete, although it is also an expensive endeavor and not in his immediate plans. "If I go solar," he laughs, "I'm completely off the grid." With a carbon footprint his kids can be proud of, for sure.

...was a true mechanic and is very talented and thorough.